Driving Up Wages at First Student 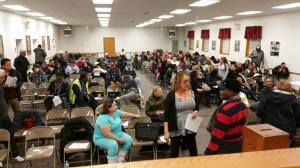 It almost came to a strike but Providence school bus drivers came away with a strong contract, including raises of nearly 44% for some First Student drivers.

When contract negotiations covering 184 school bus drivers at First Student came to a head, management refused to give ground on a key demand of the members: to increase their guaranteed hours from 2½ to 3 hours per shift. Then they voted 90 to 6 against management’s “last, best and final offer” and voted to go on strike after the February school break if the company didn’t make an increase in guaranteed pay retroactive.

The pressure and credible strike threat forced the company to relent and offer 2.75 hours guaranteed pay per shift—with pay retroactive to July 1, 2014. Shortening the amount of time it takes to reach top pay was another key issue.

Teamsters at First Student in Providence won these gains by getting involved and staying united. More than a dozen meetings were held to update members and discuss contract proposals.

Six drivers, representing both top pay drivers and new hires, were elected to serve on a Negotiating Committee that relayed info back to members on the job and directly communicated key demands to the company at the bargaining table.

“We got a phenomenal contract because members were adamant about what we wanted and we showed First Student we were willing to go out in the street to get it,” said Joyce Brazenor, an alternate steward and 20-year driver at First Student.