A Healthy Contract at Lifespan

Teamsters at Lifespan took on Rhode Island’s biggest employer by mobilizing a contract campaign that united the members.

The result? A four-year contract that delivers $19 million in improvements. In contract surveys, members identified Job Security as their number one issue. Management wanted to lay off up to 95 workers and eliminate the contract’s No Layoffs clause. Members took action on the job and in the community.

“He was always trying to throw his weight around and with new union leadership he thought he could push us around even more,” Mooradian said. With no warning, the manager changed workers’ schedules so they were forced to work until 11 at night on Fridays—a violation of their union past practice rights. Members had enough and took action. They got together and every member signed a group grievance to oppose the change and protest the non-stop harassment.

DiGregorio Concrete started negotiations by demanding a laundry list of concessions. But after a one-day strike, members changed the company’s attitude and won a contract that preserves their 8-hour guarantee, maintains funding for health & welfare and pension, and protects seniority.

Members at Marr Scaffolding entered negotiations with wages as their top priority. Their new contract not only defeated concessions demanded by the company, but provides for the biggest wage increases members have ever seen.

Freight update: Standing Up for Safety

Imagine you’re driving down the highway behind a semi and you see the trailer detach from the truck. Now, imagine being behind the wheel of the truck waiting for that accident to happen. Local 251 members at YRC and New Penn don’t have to imagine. A faulty release valve used on many Volvo trucks at YRC and New Penn has caused trailers to drop in yards.

Mike Rianna, a UPS package driver, has seen a lot in his 17 years on the job. But nothing compares to the day last December when his actions saved a customer’s life. Rianna stopped at a house where he usually leaves packages at the front door. But it was freezing cold, so when he saw the garage door was open he looked inside to deliver the package directly to the customer.

Instead, Mike Rianna found a woman lying motionless on the ground. While his helper called 911, Rianna was able to get her to come to, enough to help her inside the house and out of the cold. Inside, the woman began to convulse with a seizure. Mike and his helper waited with her until the paramedics arrived.

Teamsters Local 251 is continuing its sale of the fleet of cars used by the old administration and putting the funds to work for the membership. We are selling the cars off through a sealed bid auction. Members can submit bids for the cars and sealed bids will be opened at the Sunday, May 31 monthly meeting.

Click here to get more details on the cars up for bid and bidding process.

United to the end, Teamster members have voted to approve our new contract at Rhode Island Hospital by a 97 percent margin. Members voted 562 Yes to 17 No to ratify a contract that delivers job security and $19 million in wages and benefits.

This contract victory belongs to the members who united for a fair contract. We did more than win a better contract. We’ve built a stronger union and forged new alliances with community groups, other unions and public allies. We have found our voice and we will keep using it to speak out for good jobs and quality care. 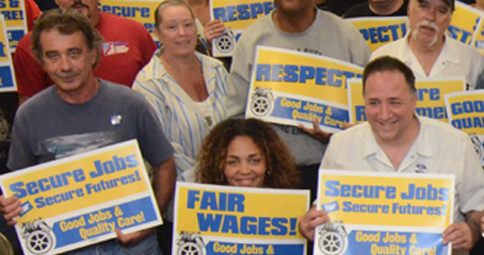 Rhode Island Hospital Teamsters united for a fair contract and our unity has paid off. Now we have a contract to vote on.

Read a summary of the highlights of the new contract. Then come out this Saturday to get answers to your question and to cast your vote on the new agreement.

We will have materials at the contract briefing so you can review all of the contract changes before you vote.

The Union Bargaining Committee has reached a tentative agreement on a 4-year contract that delivers $19 million in improvements for Teamster members at Rhode Island Hospital.

The latest contract bulletin summarizes some of the highlights of the proposed agreement. Members won all of these improvements and more because they stayed informed, involved and united.

Every Teamster at Rhode Island Hospital has the right to vote on the contract and to review all of the contract changes before they vote.

Voting will be held at the Union Hall on 121 Brightridge Avenue in East Providence.

We urge you and every member at the Hospital to attend the important contract briefings, to get answers to your questions, and to vote.